The 111 1859 Narrow 9 obverse dies do not lend themselves to being sorted into groups, so they are sorted and numbered as discussed in the future separate article, How to Use This Catalog.

Fortunately, the reverse dies of the Provincial cents are much more amenable to sorting into groups than the obverses are.  The first sort level is the obvious one: the major date varieties, 1858, 1859/8 and 1859 Narrow 9.  In his books Rob Turner divided the 1858 cents into three Reverse Groups RA, RB and RC, and placed the overdates into a fourth group, RD.

The most fruitful approach to sorting the nearly 300 1859 Narrow 9 reverse dies is to divide them into reverse die groups based on wreath deterioration on the reverse punch and its repair in the dies.  Our groups begin with E in order to form a smooth continuum with Turner’s groups for the 1858 & 1859/8 cents.

The characteristics of the 1859 Narrow 9 Reverse Groups E-P are shown in the tables below.  The first table gives the meaning of the abbreviation symbols used in the second table.

The order of the Reverse Groups approximates the order in which they were created.  There is some uncertainty about the correct placement of some of the small groups, but the larger groups are certainly in the correct order.  The number of dies in each group ranges from 1 to about 133. 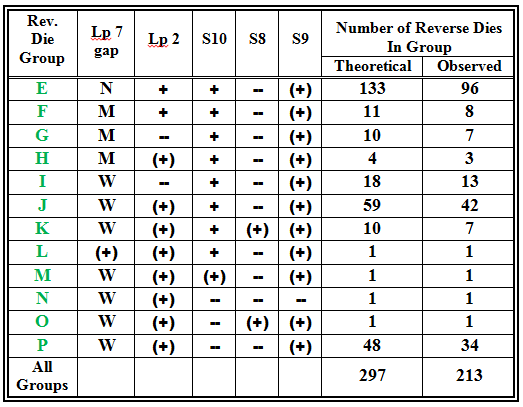 The Genesis of the 1859 Narrow 9 Reverse Groups

As already seen before, the reverse punch progressed by deterioration from State 7 through State 13 during the production of the 185- dies.  Each punch state and its characteristics is laid out in the scheme below.  Characteristics shown in red indicate changes that had taken place to create that punch state from the immediately previous state.

Now, in each of its states the reverse punch sank a set of dies prior to progressing on to the next state.  Each set (shown in purple) is numbered from 7 to 13, reflecting the punch state that sank it.  When the dies were first sunk, they carried all the wreath flaws present on the punch at that time.  But they were not left that way.  During the finishing process, anywhere between one and three of the flaws were repaired, changing the way the die appeared compared to its source punch.  Each numbered set of dies, then, splits into as many different reverse die groups as there were repair patterns.  For example, punch state 7 dies only received a single repair, Stem 9, so they all became a single reverse group, Reverse Group E.  On the other hand, one of four different combinations of repairs was applied to the dies in set 12, so a finished die from that set could end up producing coins in Reverse Die Group I, J, K or L (depending on which repair pattern it received).

Attribution of the groups containing the Medium gaps in Loop 7 is a challenge requiring careful removal of dirt in that area.  For the sake of simplicity in the assignment of Reverse Groups we have considered each of the four variations of the Medium gap to be equivalent to each other.  This creates the situation in which Groups G & H each arose from two punch states.

As complex as it might seem at first, there was a great deal of thought put into the assignment of the 1859 Narrow 9 reverse groups! 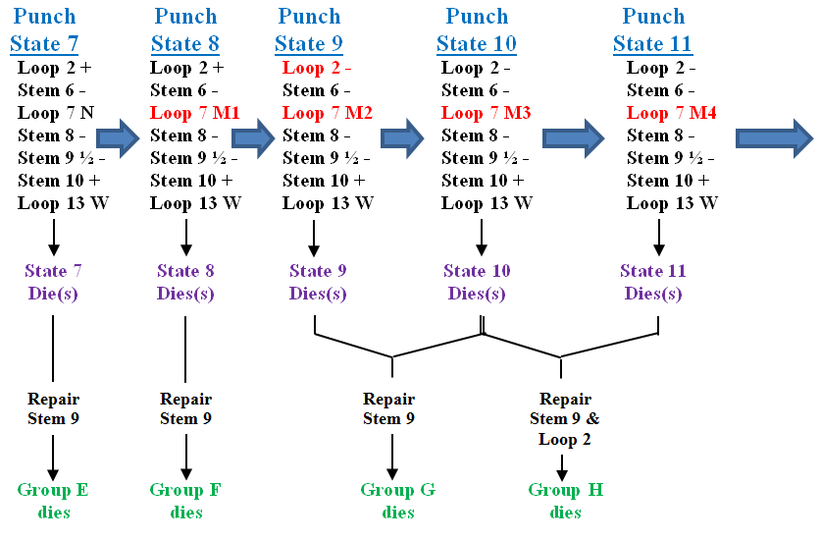 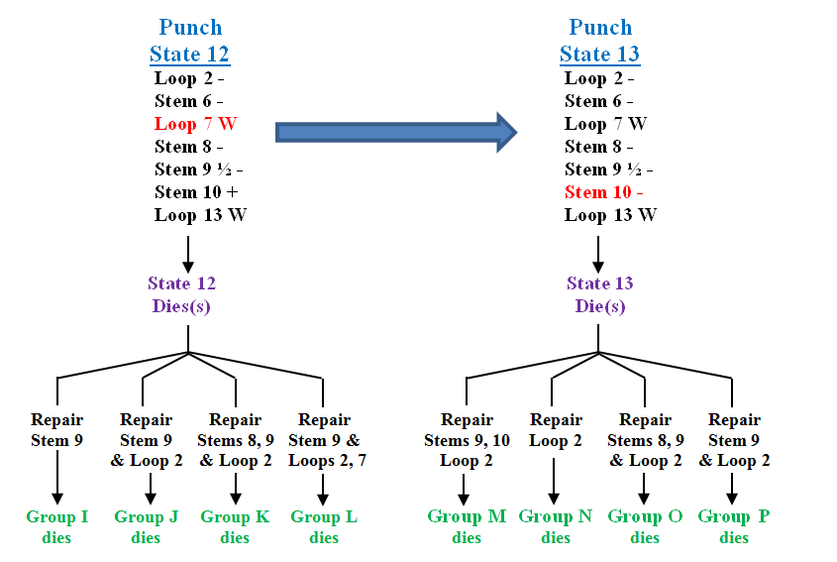 The nomenclature convention for dies within the reverse groups is given in the future article, How to Use This Catalog.

This concludes the Introduction.  Hopefully, you’ll now have at least a bit better understanding of some of the many features there are to see on the 1859 Narrow 9 cents you encounter.  Happy collecting!
Acknowledgements
I am pleased to acknowledge some suggestions by Bill Hall, which led to the improvement of the manuscript.  And I can't fail to recognize Ed Reny, who has tirelessly provided technical assistance and considerable useful input on this difficult manuscript.  Finally, there are the "coin widows" indirectly associated with this catalog:  Tammy, Ed's wife, and Andree, my wife.